It started at the Social Security Administration - think of Tom Hanks' depressing office in Joe versus the Volocano, only not as plush. Pam started working there about year after I did in the same software support division as me.

We worked on the same floor but still chatted by office email to pass the time and to learn more about each other. I occasionally chatted and joked at her desk so people naturally assumed that I was flirting. <UGH> The seed of office gossip has been planted…..

After talking about everything from computer software to why egomaniacs drive SUV’s ( she didn’t know I had a 4Runner at this point) we decided to do a few casual things outside of work. After a few movies as friends over the next month we started to date, still under the 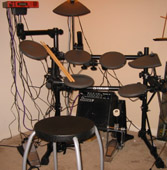 radar of the ever gossip hungry coworkers. Soon Pam and I were doing everything together: going to museums, visiting friends, lazing around the house doing nothing and an occasional trip to Johns Hopkins ER. I was perfect. BIG STEP = the first was me moving my new drum set into her house so I didn’t have to go back to my apartment to practice, a decision that to me 2 weeks to commit to!

BIG STEP( part 2 ) = Moving in with Pam in her new house. Up to this point we relayed how neither of us could EVER imagine living with anyone else, much less a significant other! <words eaten here> 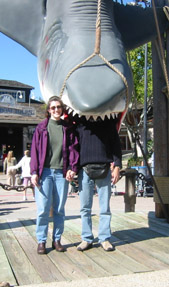 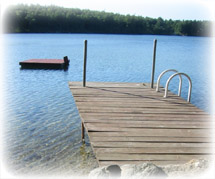 Playing it ‘cool’ in the office ( walking by, robotic ally saying “Hi Pam…How are you today) was slowly taking its toll. Pam surprised me with an invitation to spent the weekend with her at her families beautiful lakeside cabin in Maine. A few months later we jetted off to Disney World and Epcot in Orlando. The only time we talked about all the marriage was to retell stories of wedding and child birth obsessed people & why in the world was that such a focal point right off the bat. BIGGEST STEP( part 3 ) = I proposed. That’s a story in its self, read at your own risk!

You have to know Pam to fully realize what a daunting task pulling off a surprise proposal was going to be. Example – She has ears like a damn bat – if we are in a restaurant she can hear conversations clear across the room. Pam also picks up on the most subtle facial cues and knows if I’m up to something and will painfully loop “whhhat????” over and over again as I reply “nothing…”. Another deciding point is that she is NOT into foo-foo canned romantic things ( 3 months ago : she walked into our Valentine’s day suite at the Four Seasons, look around for a few minutes and said, “Ok, wanna walk around before dinner?” ). Given that – I have these constraints:

1) Anything out of the ordinary would be a red flag. “Wow, its Wednesday, lets go to a nice restaurant”or even benignly saying “Hey lets take a walk”. Insta-busted.
2) Passé romantic approach is a dead give away.
3) I have to get her to ‘discover’ the ring by purely knowing her.

Given fact: Pam is a technical pit-bull when it comes to computers, very knowledgeable and hands on.

The setup. I casually mentioned that Nissan requested me to produce some 3d car animations to be Fed-Ex’d by this Wednesday.
Sunday: The rings was purchased.
Monday: Asked her what we had on our plate for this week – she said it was completely open…..perrrrfect! Reservations were made for Wednesday 8:00 at our favorite restaurant. During work on Tuesday ( after a sleepless night ) she mentioned that she was planning on meeting with a client ( she does publication and tech work for a self employed guy ) on Wednesday evening! <insert panic here>. In a panic I called my sister and told her of my crumbling plans and asked for help. In a stroke of genius my sister emails :

“ J – Hows it going? Can you and Pam come over to look at my laptop. My companies migrating to a new system and I can’t log on. I really have to get this proposal out and I’m not sure if this new VPN is causing a problem. So if you guys have time, maybe you or Pam, preferably Pam ( no offense ) could look at it for me. Tonight is bad but late tomorrow would be great. Thanks!”

The email also only came to me, perfect. I printed it out and showed it to Pam at her desk as kind of an after thought – “Oh, my sister wrote me….”. An hour later Pam told me she wrote Monica back and agreed to be at her house, which would actually be our Wednesday reservation time!

All Tuesday night was setting up fake 3d wireframe animations that ran in a loop to make it look like I was doing something in preparation for my faux contract work. We went to work the next day only I left early to set up for the surprise.
Wednesday – Pam arrived home to find me on the living room couch with my arm covering my eyes. “Whats wrong?”. “My dvd burner is dead. I cant save all the the dvd video I’ve been working on..” Pam said, “ Lets look at it. It must be something simple.” In most pathetically resigned voice I said, “Screw, I don’t care. I’m calling and telling then I cant get it done”. With that, Pam proceeded into the back room to look at my pc. The desk was strewn with cables and crumpled pc diagrams covered with desperate scribblings that painted a picture of technical futility. We got the case open and she was in full pc-geek mode when she discovered the white boxes. I proposed ( verbiage is private! ) and simultaiously revealed the dinner reservations and pointed out my hung shirt and tie. Pam looked at her watch and said “Ok…..we have to hurry so we can make it to your sisters..”
I replied. “Do we???”

In closing : you had to be there.

( 5-29-2003 ). These are the rough(very rough)notes of our wedding planning efforts. Nothing is carved in stone or finalized - shown to give you an idea of what/where/when were seeking for the big day.