Many people have seen the episode of the Discovery Channel’s Mythbusters where they tackle the myth of the “Killer Card”. The myth goes that a skilled person could fatally wound someone with an ordinary playing card. Here are of the show notes::

throw playing cards is one of those geeky projects that really does’nt better the world one single bit. Its yet another technical challenge posed by a bunch of guys whom never grew up. Where do I find these people?

By the conclusion of the show it becomes quite clear that killing someone with a playing card is really far fetched, but it was just enough to self-challenge ourselves. The goal was to hurl playing cards 45feet into a small trashcan flipped on its side. I won’t get into the details of the bet but one part of being the loser is taking A FULL 52 card deck in the back from the winner’s machine!

With the Dremel running at fulll speed - a full deck of 52 cards was shot from my hand in less than 2 seconds! Trust me, 2 seconds is a generous estimate. Ok, from the initail test it seems like it should be really easy to build a monster card throwing machine!

Theres a little physics to it....

Four factors influence the flight of the playing card, speed, rotation, gravity and air. Just for laziness sake - I'll only write about the crutial factors...

A playing card is practically a slower flying model of a bullet.
By spinning a bullet while it travels down a gun barrel stabilizes its path after if leaves the barrel. Spinning is intended to stabilize it through the air to the intended target. The weight and length of a bullet factor into the stability of the bullet and thus will affect a spinning card similarly. The accuracy of the bullet would be affected by different spinning rates of the bullet.

Since the bullet spins when it leaves the barrel because of the rifling, it has angular momentum.
Angular momentum stays almost constant throughout the flight of the bullet, unlike the speed which obviously slows. This is the same but much more significant with the playing card. The angular momentum can be determined by the rate of twist and velocity of the either the playing card or the bullet. A playing card, like a bullet can spin too slow or too fast. Bullets not spinning fast enough will “yaw” or turn sideways in the air. By “yawing” the bullet will tumble and fail to connect with its intended target. If a bullet spins too fast, it causes the irregularities of the weight distribution of the bullet to be exaggerated. Rotation is crucial. Without it a throw on playing card wou 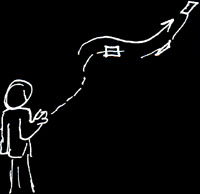 ld flutter and tumble like a falling leaf, because the aerodynamic forces aren't perfectly centered. The lift is often slightly stronger on the forward half of the card, and so that half usually rises/falls causing it to flip over.

When these irregularities are started the bullet will start to wobble and will cause the bullet/card to vary from its intended course.When the bullet or a plying card is affected by air resistance its linear momentum will also be affected. Linear momentum of is measured by the cards/bullets velocity and the mass of the projective. The velocity will decrease as the distance traveled increases. Air resistance and drag, created by a playing card contribute to a decrease in linear velocity of the bullet. You can see that while linear momentum decreases and the angular momentum stays constant, a target farther away will become harder to hit.

When the linear momentum decreases with constant angular momentum the card will yaw which causes the bullet to become unstable and not fly to the intended target. These factors contribute to the how the bullet will fly through the air to the intended target. Recent tests with the last version of the card shooter proves that these factors become significant at 40+ feet.

People stop being productive hours before the work day is over. 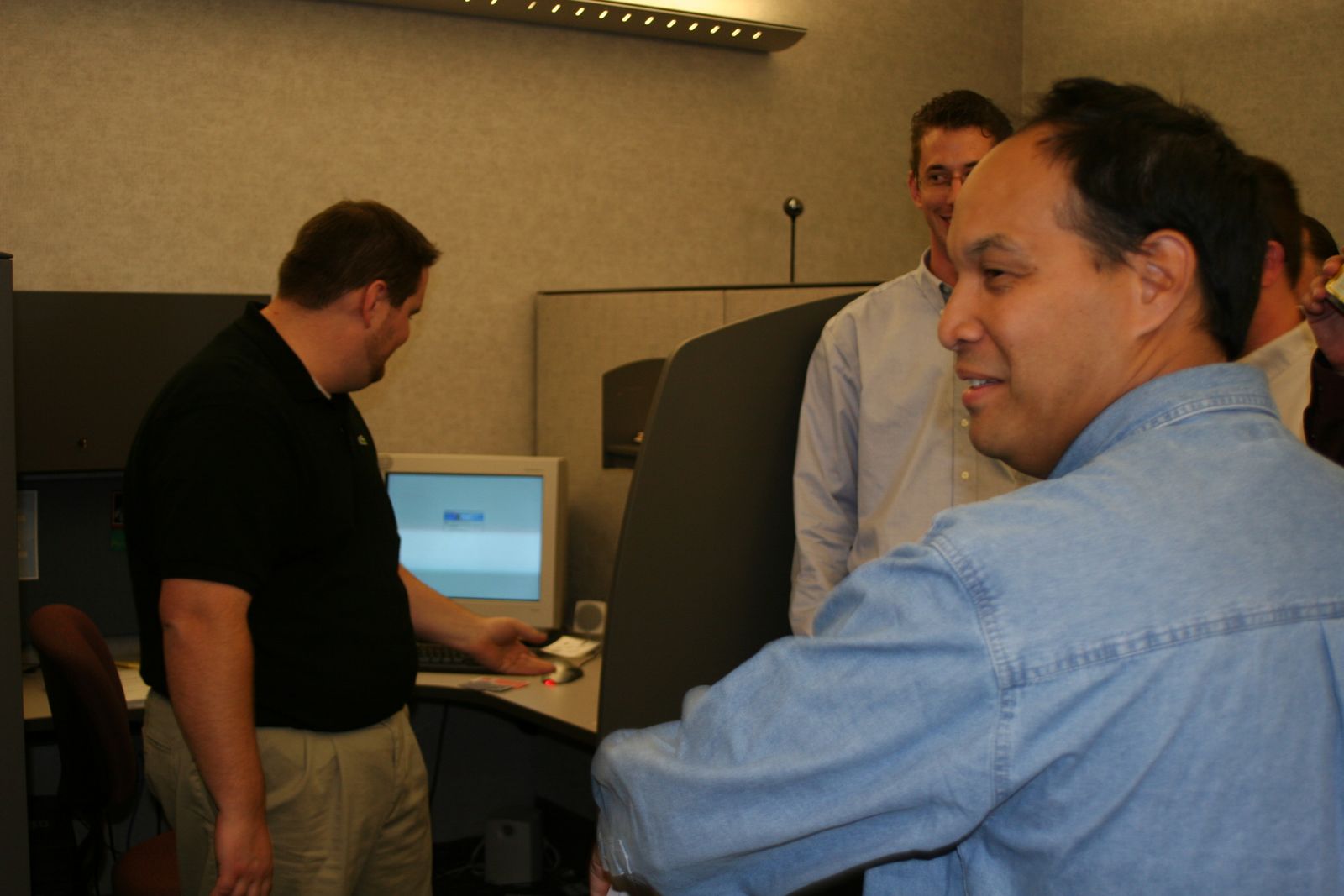 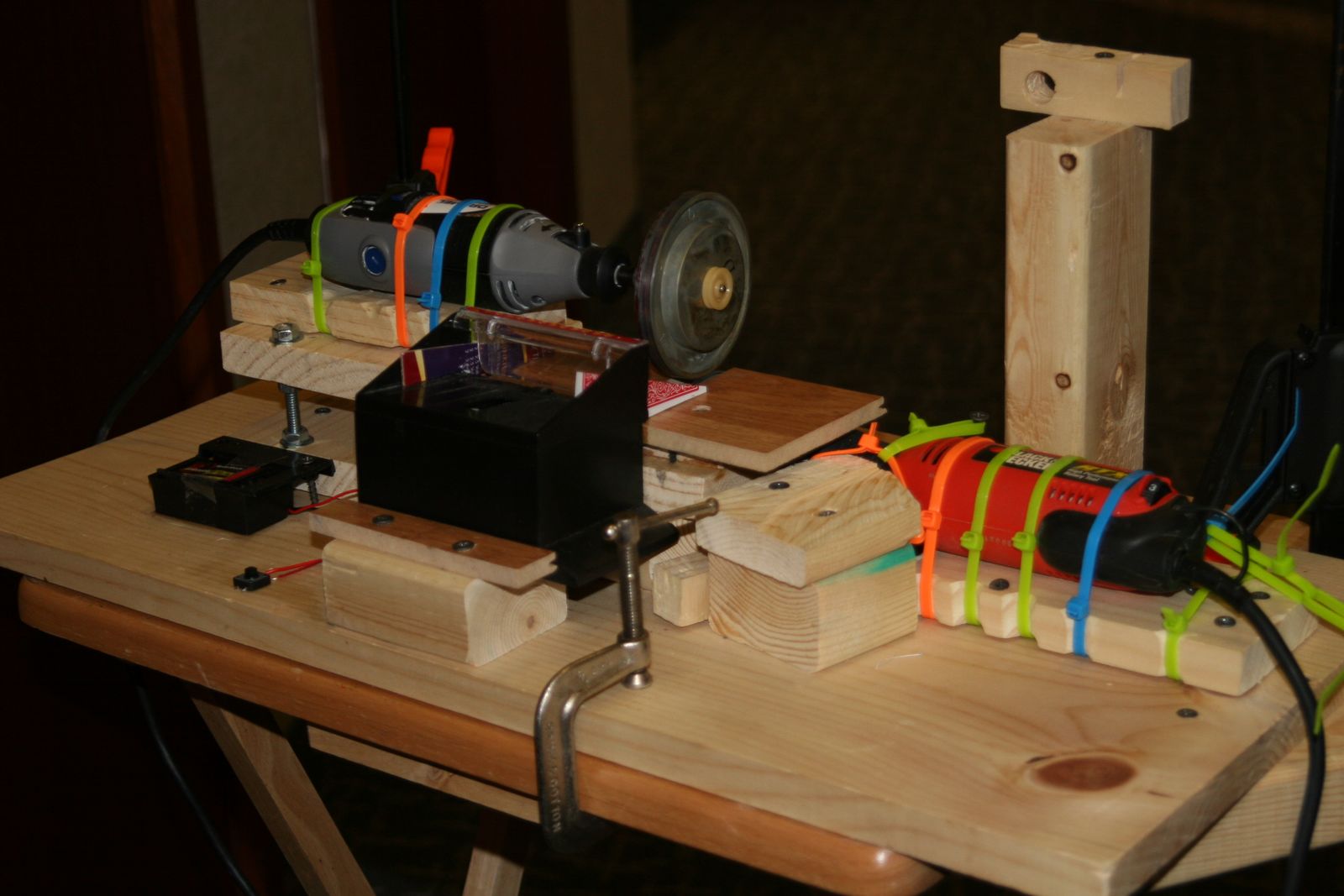 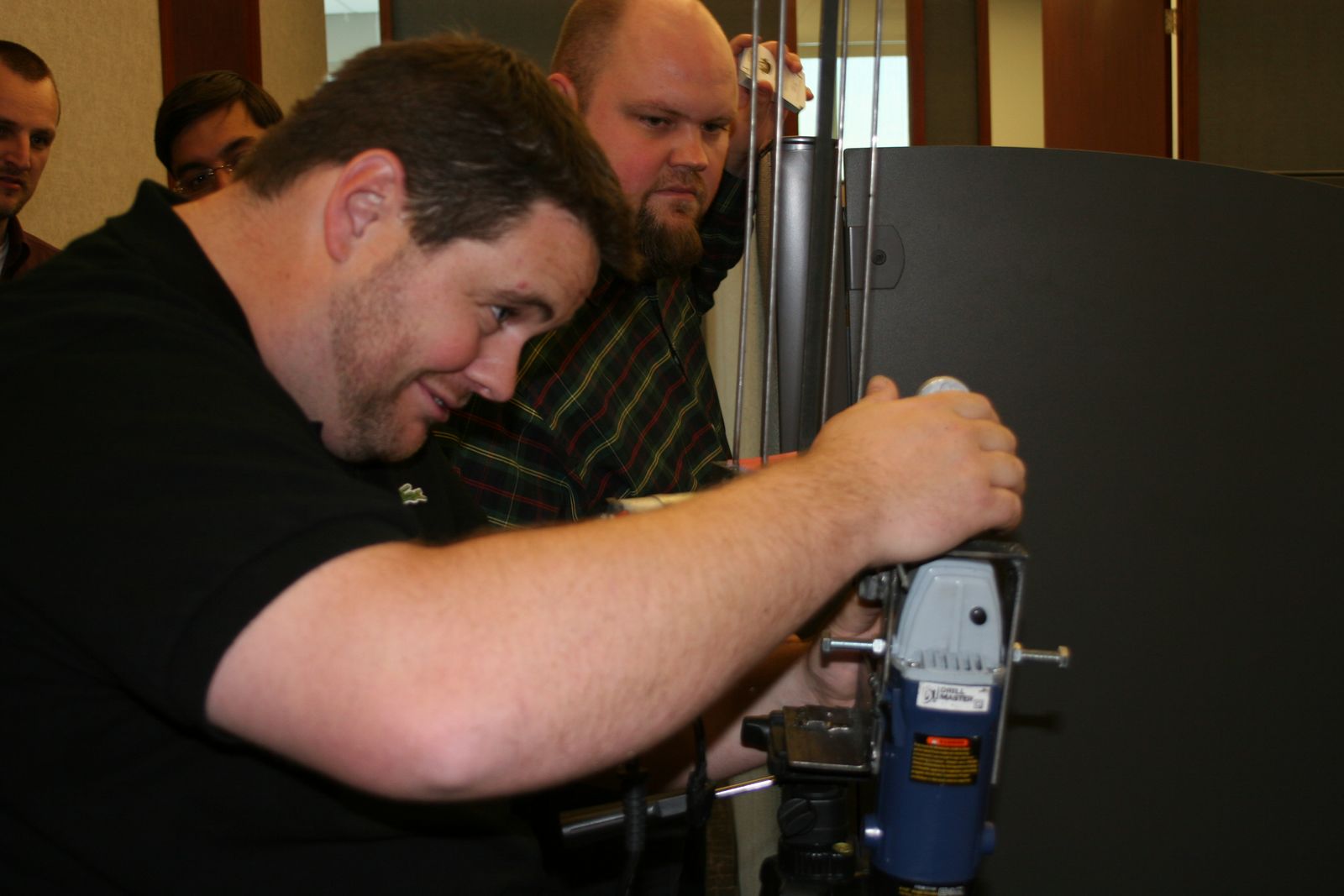 Jesus whats up with these guys and using cable ties as alignment aide? Well this looks more like a tensioner. 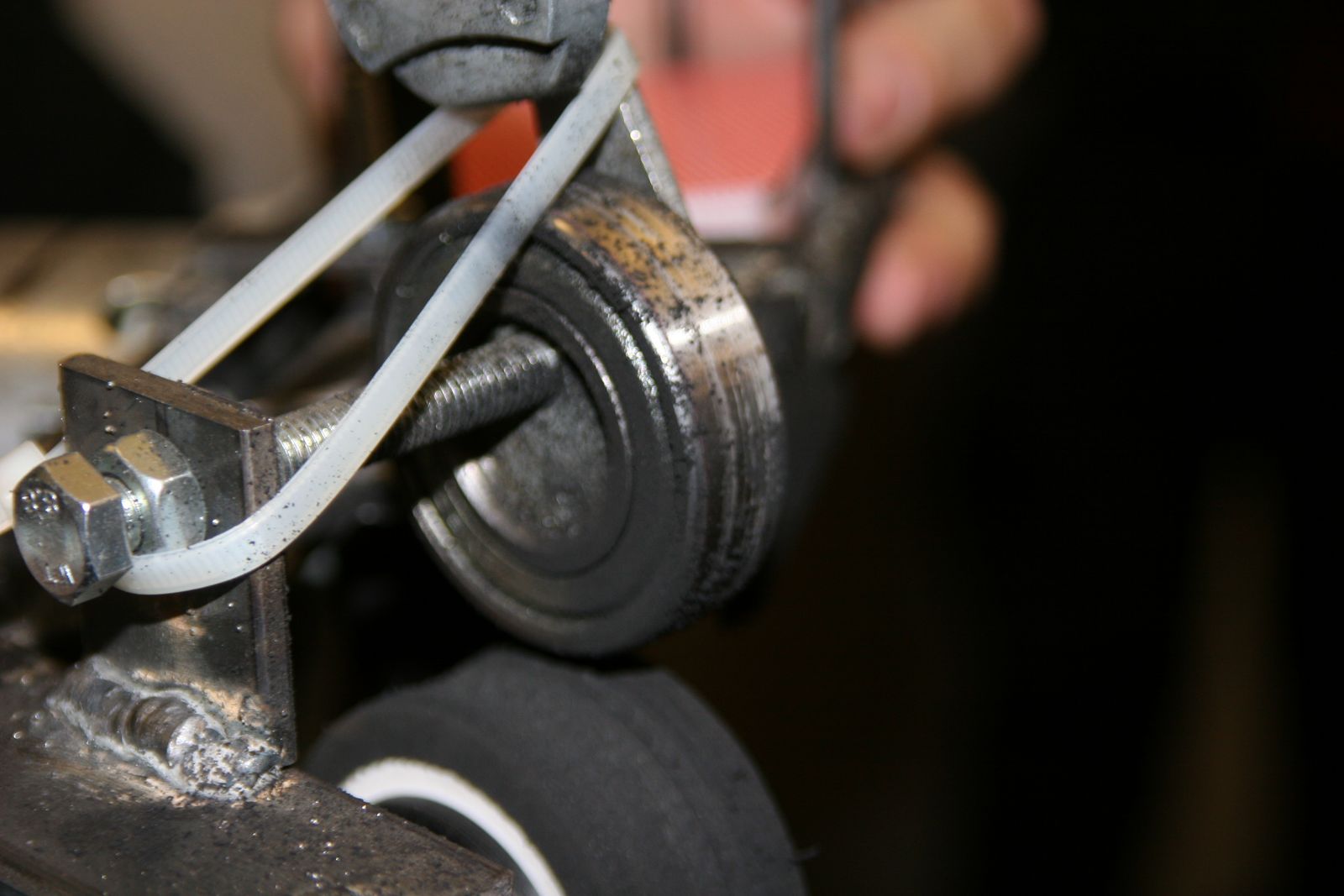 People gather around Brett.. nice to give the BOSS some faux support 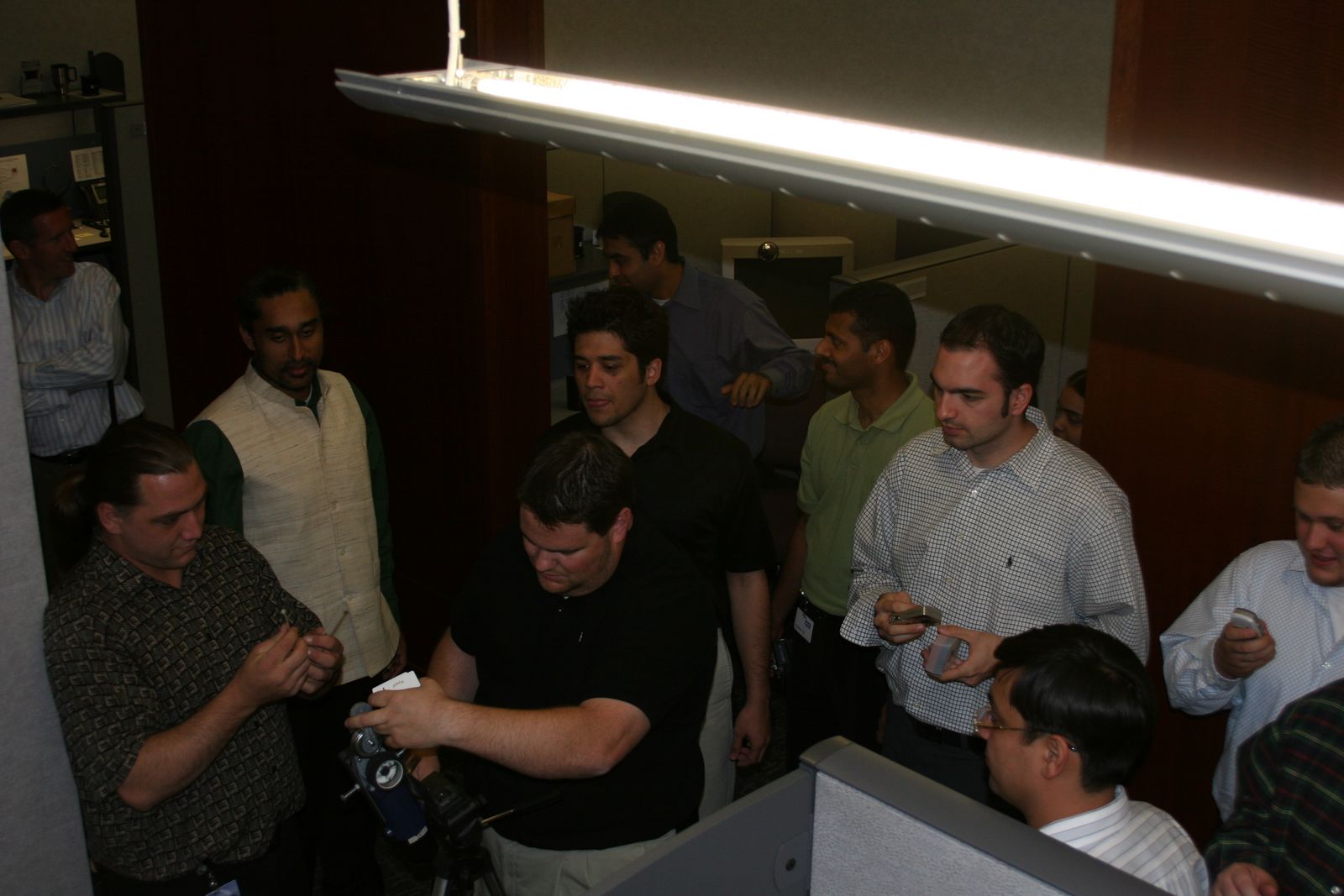 My first fire before I put the gaurd plates on 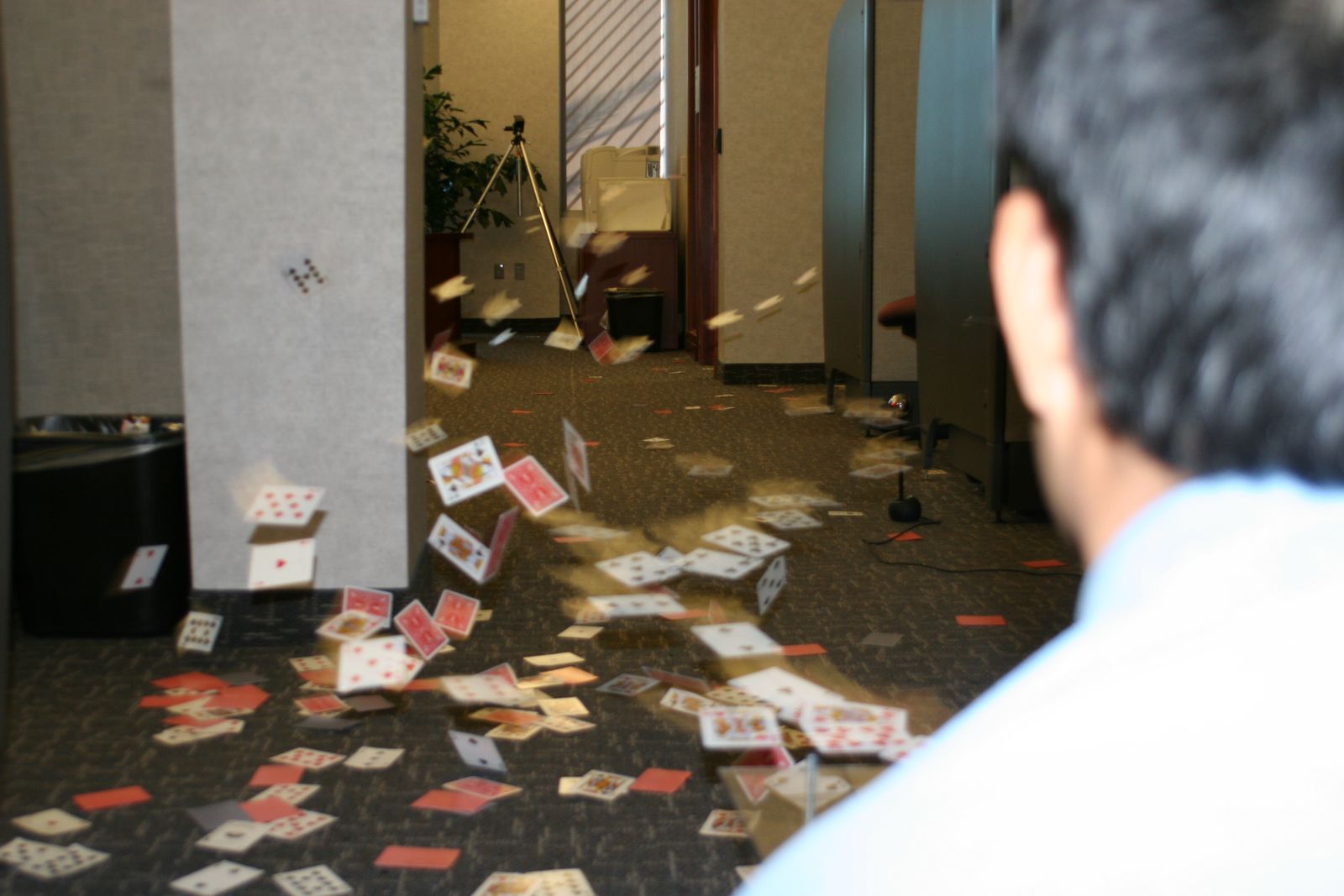 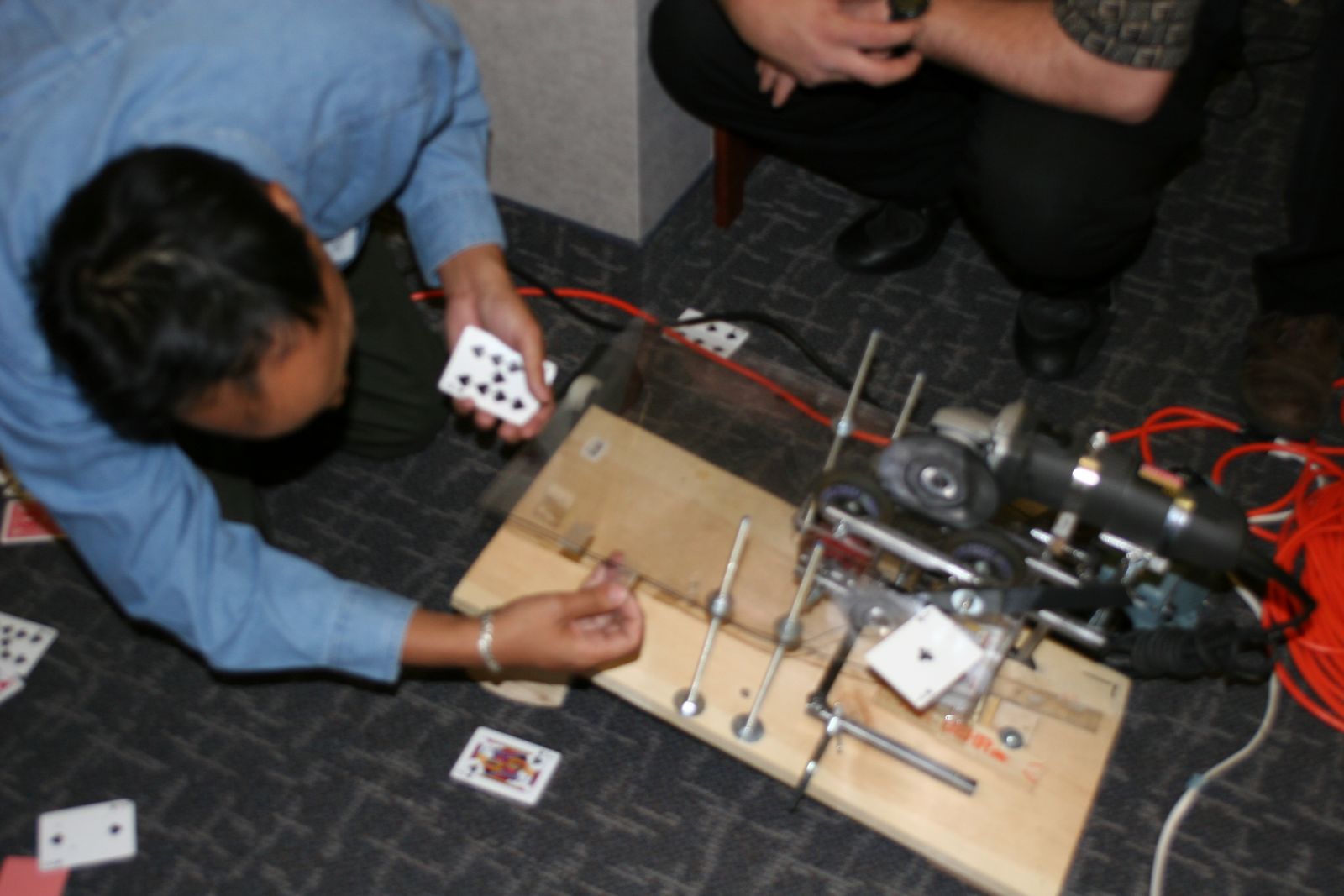 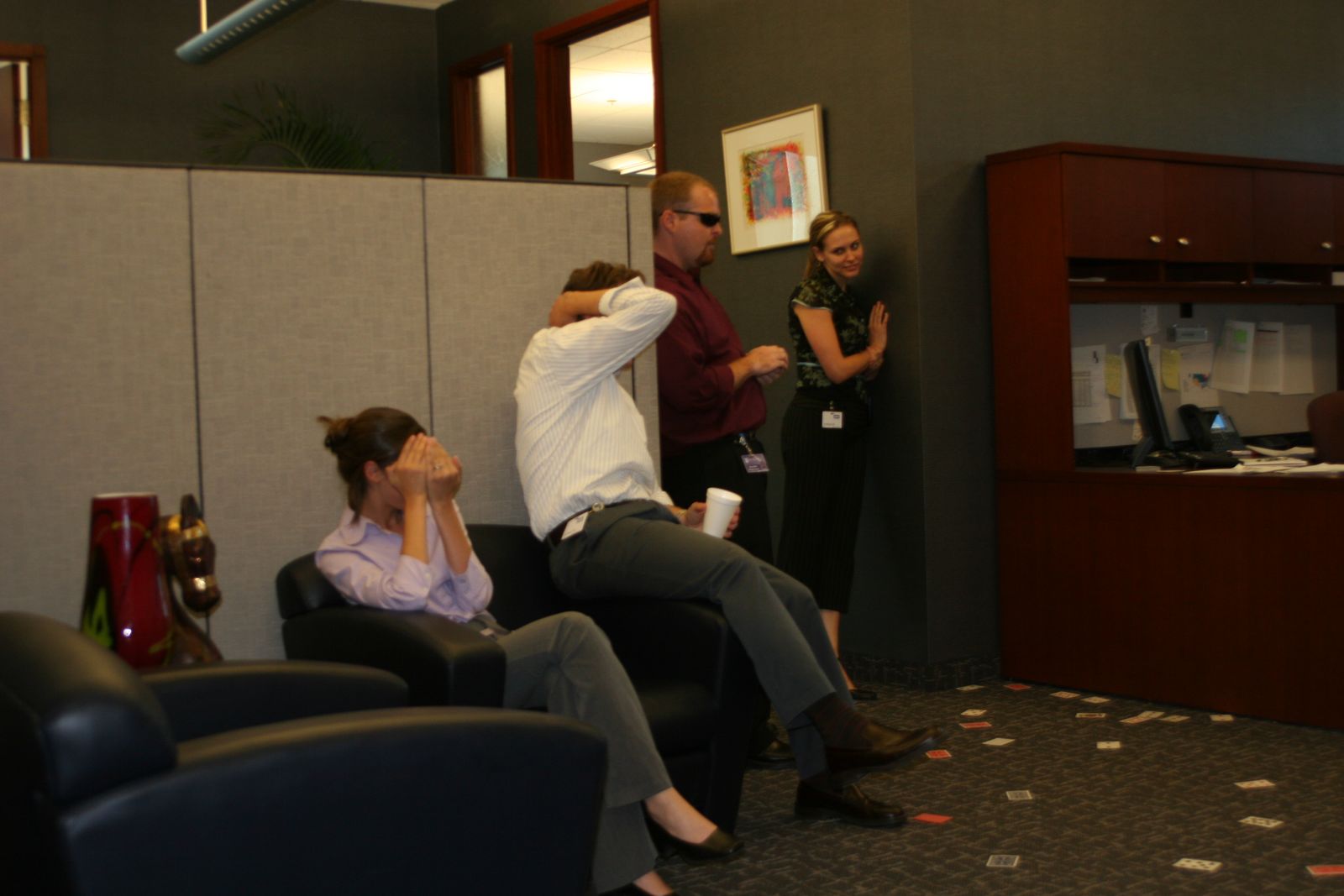 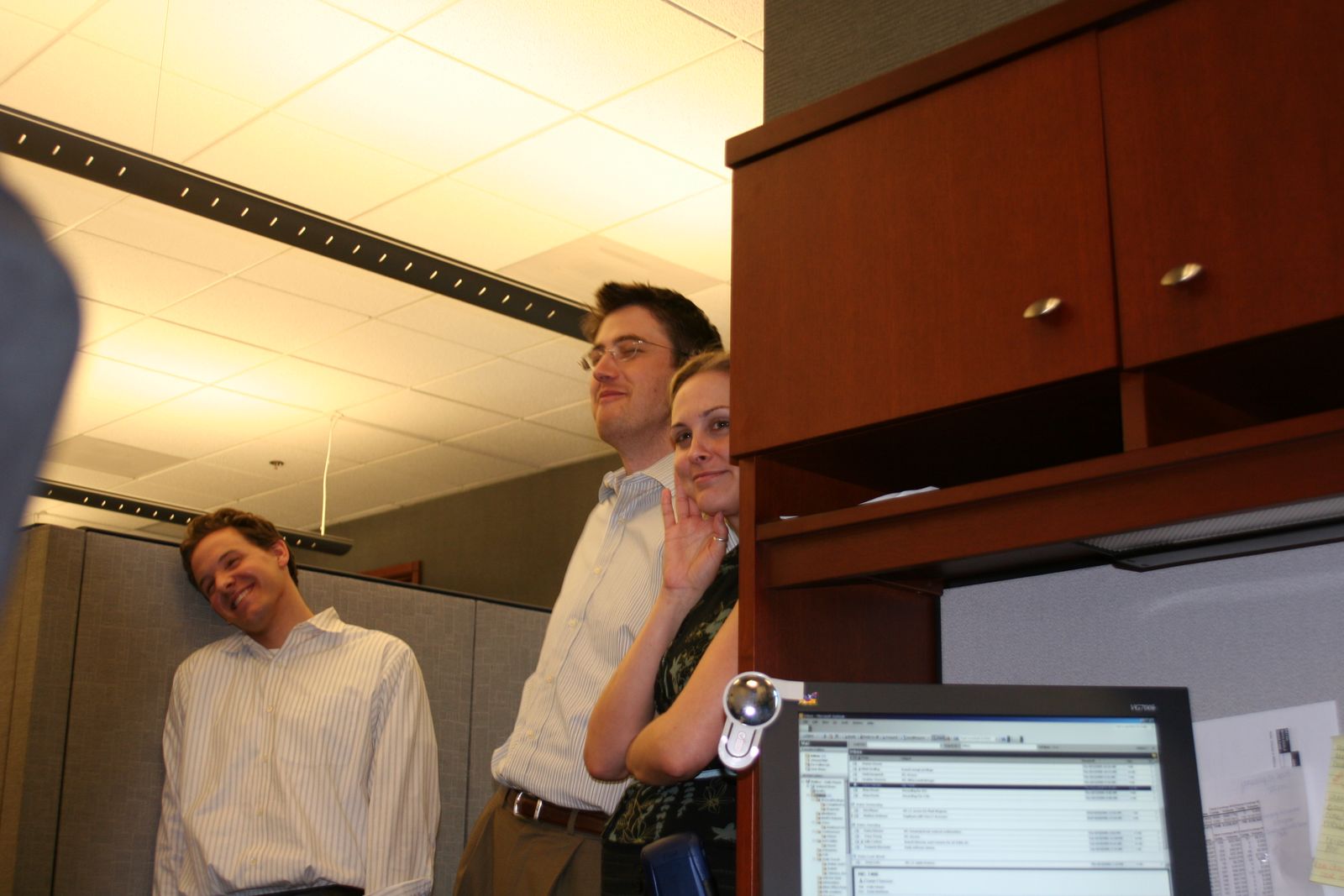 After a mere two firing from bretts 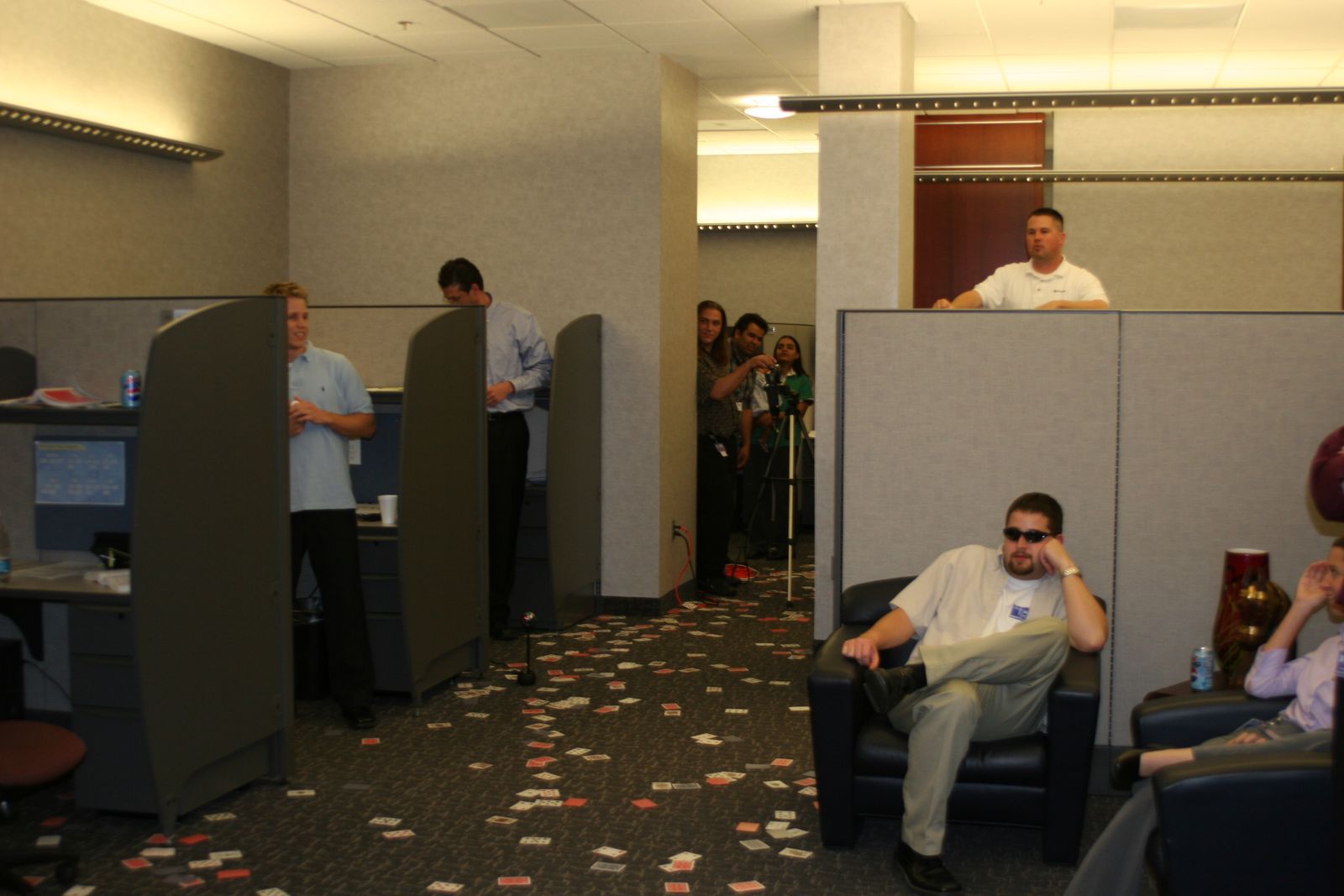 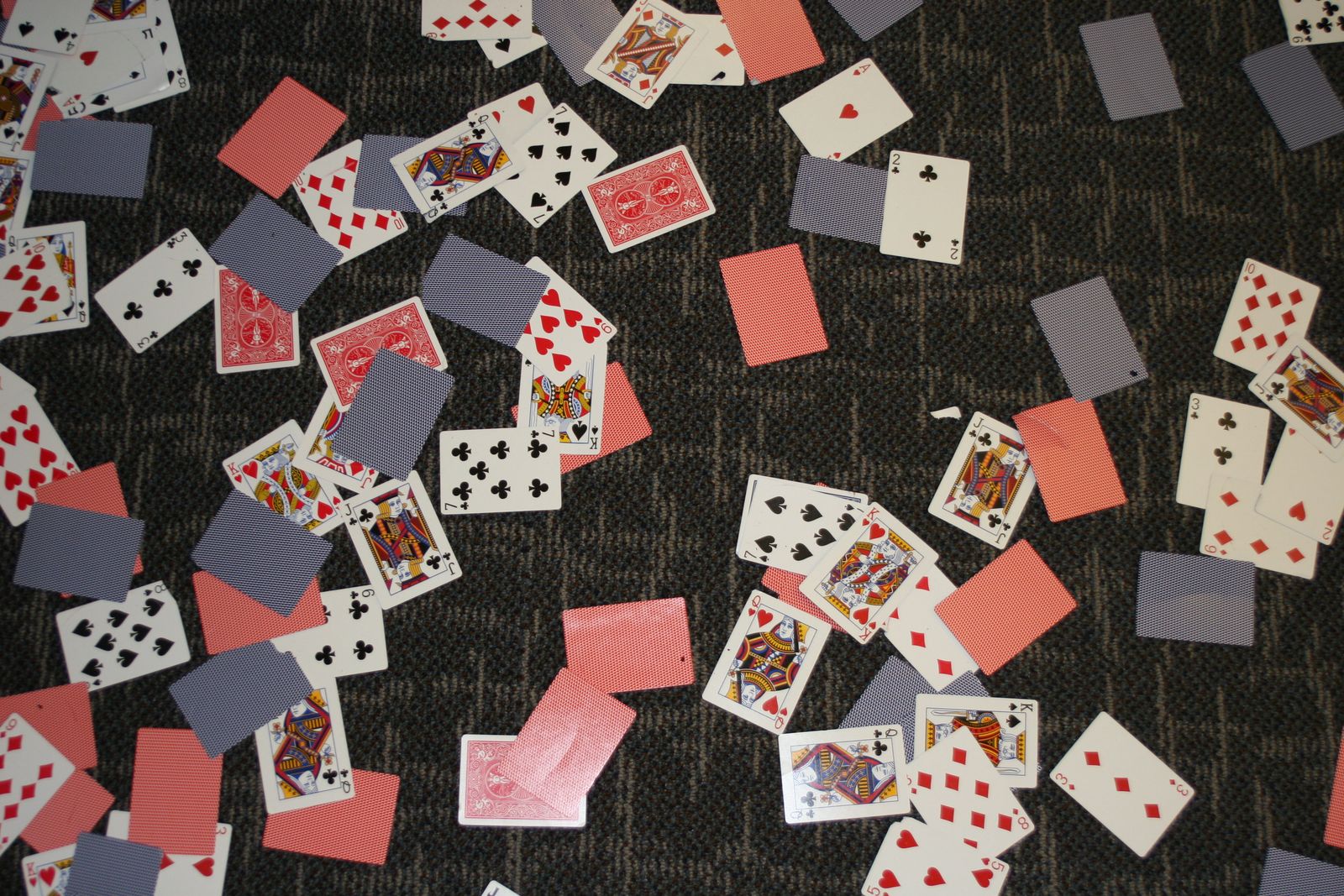 He lost at one of the contests & had to stand in front of the other's machines! 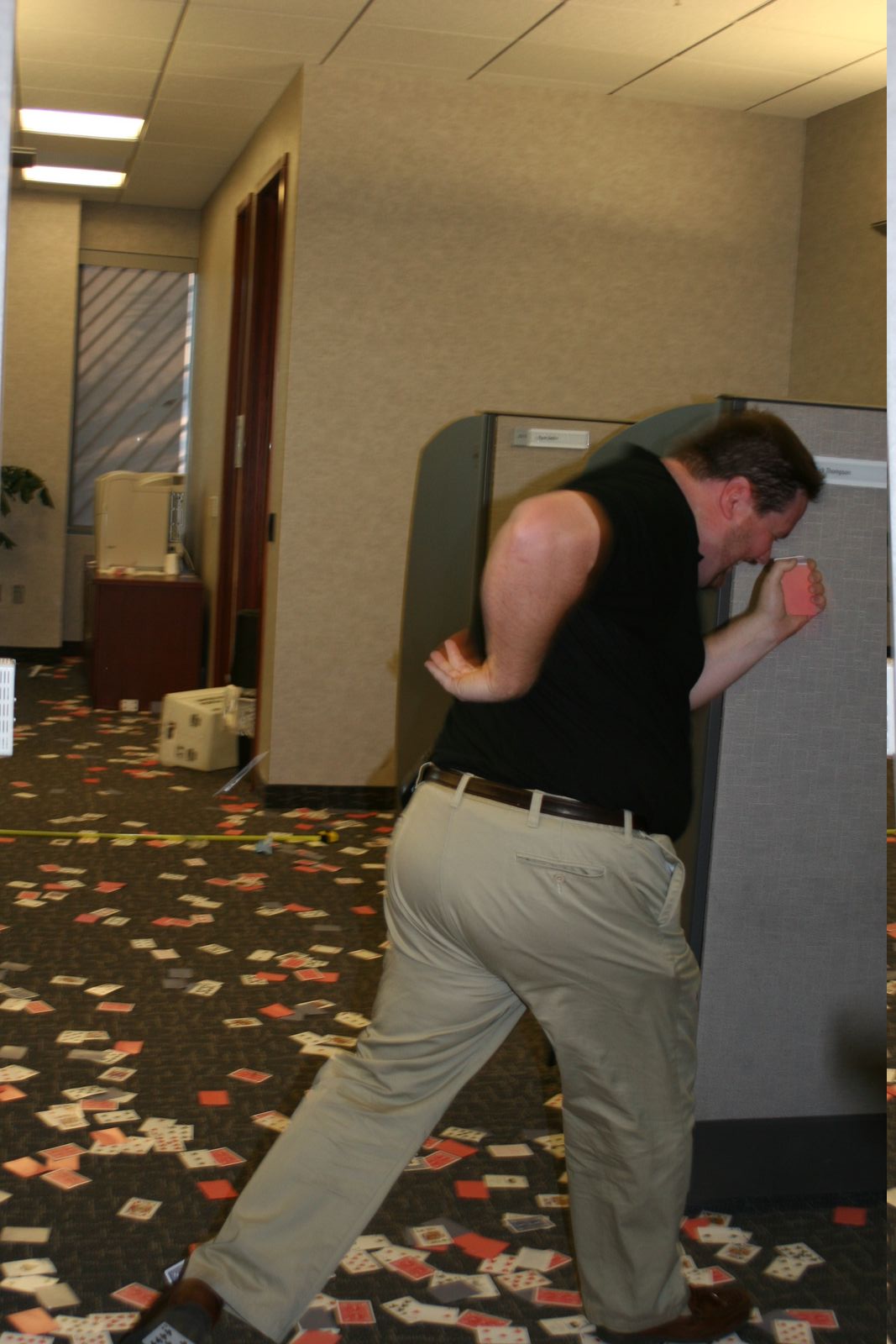 Outdoor "Longest Shot" event luckily I won this one at 120ft. 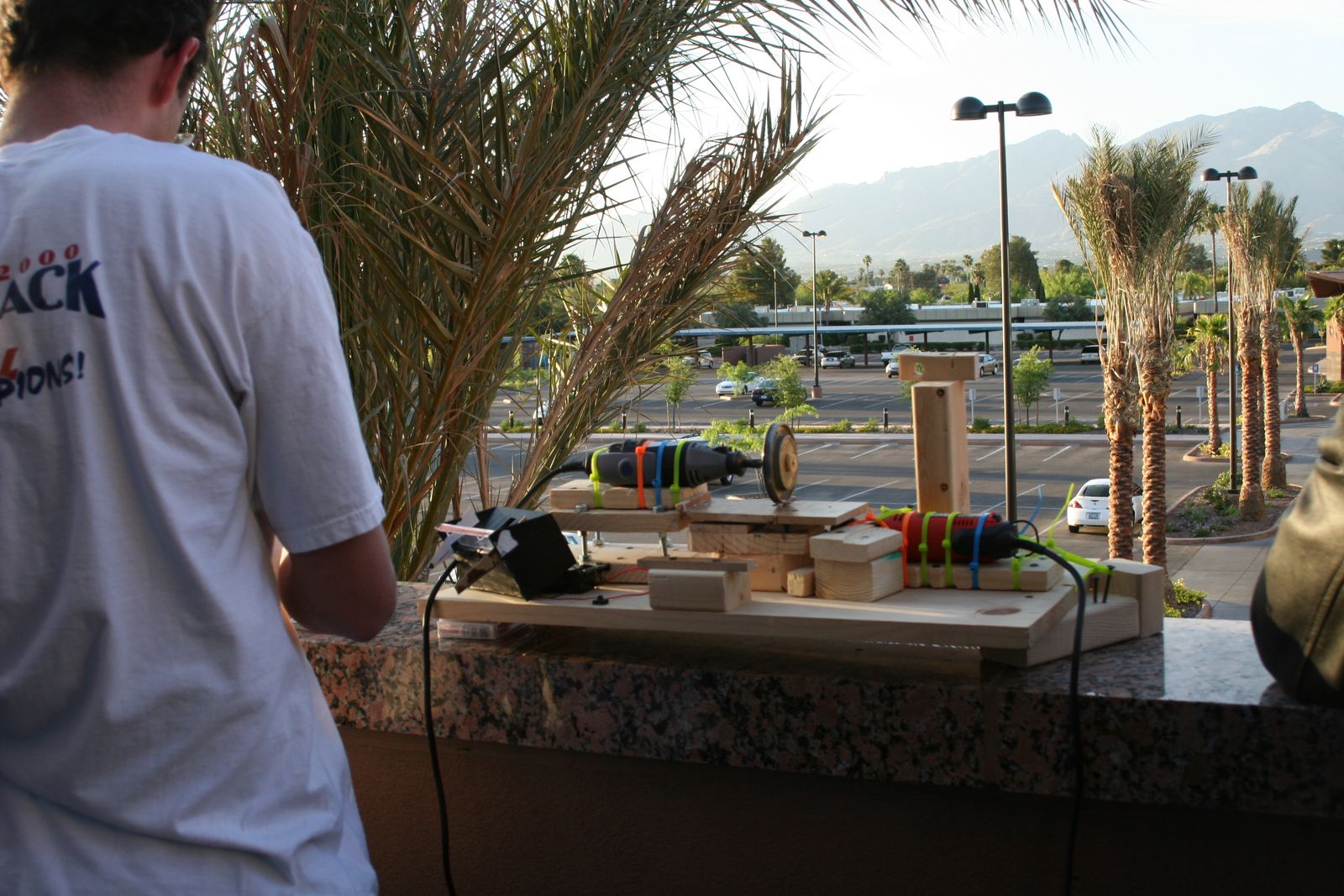 More unsorted construction pics. Everything started by ditching the Dremel and brining in the big gun - a angle grinder with the rubberized paint pad. 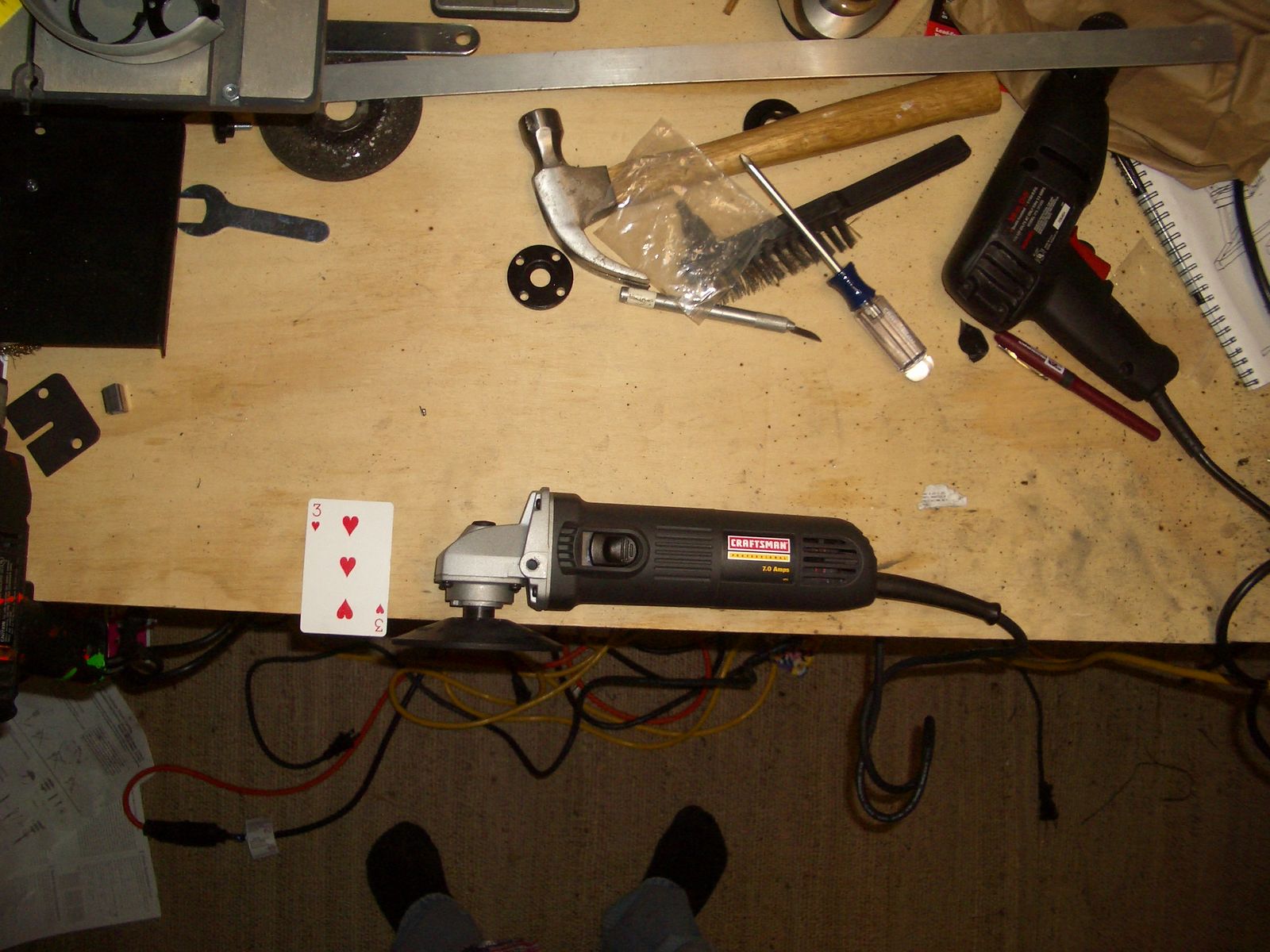 Experimenting with the spacing between the top and bottom rails. I think i settled on 3x card widths. 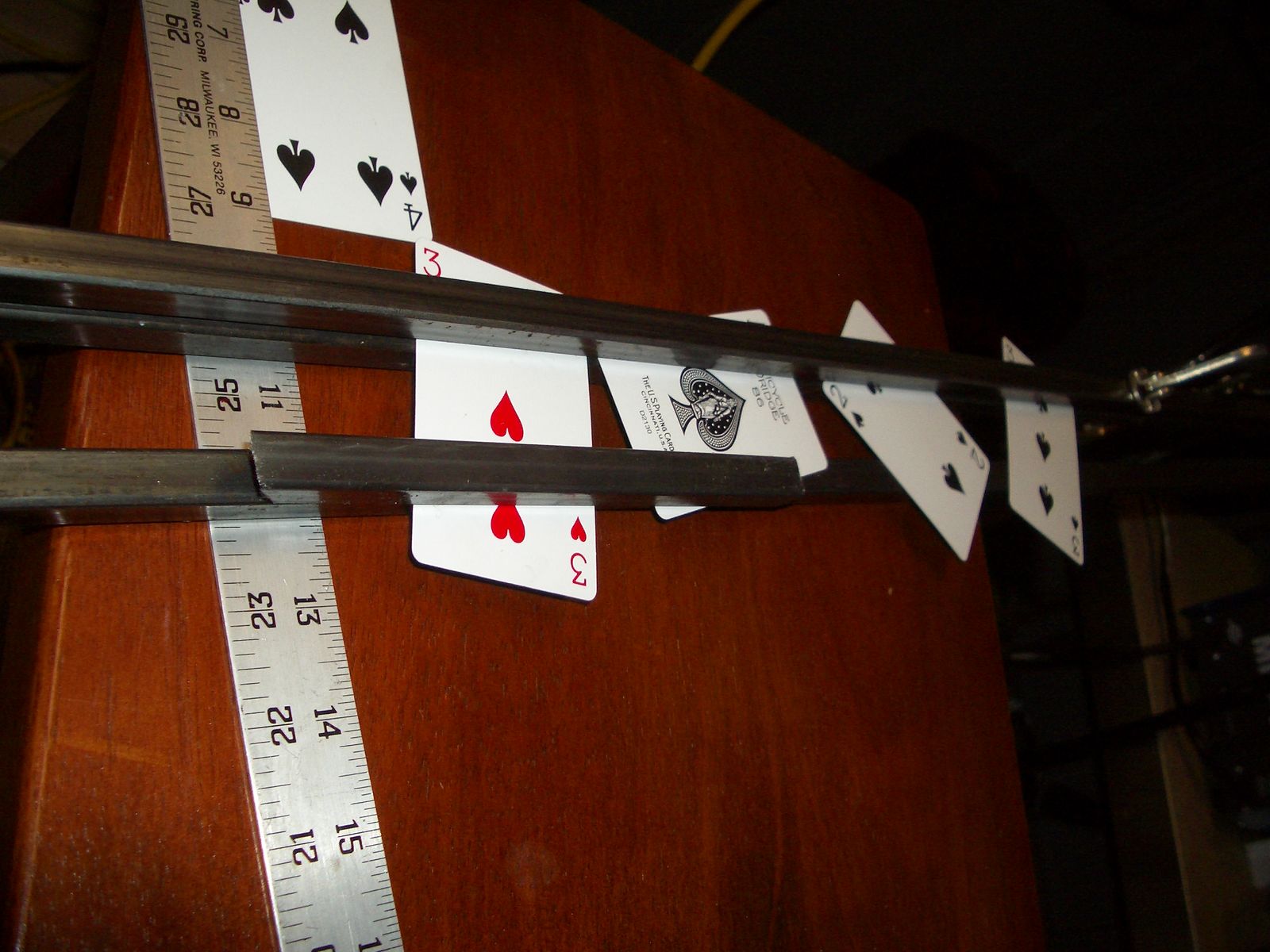 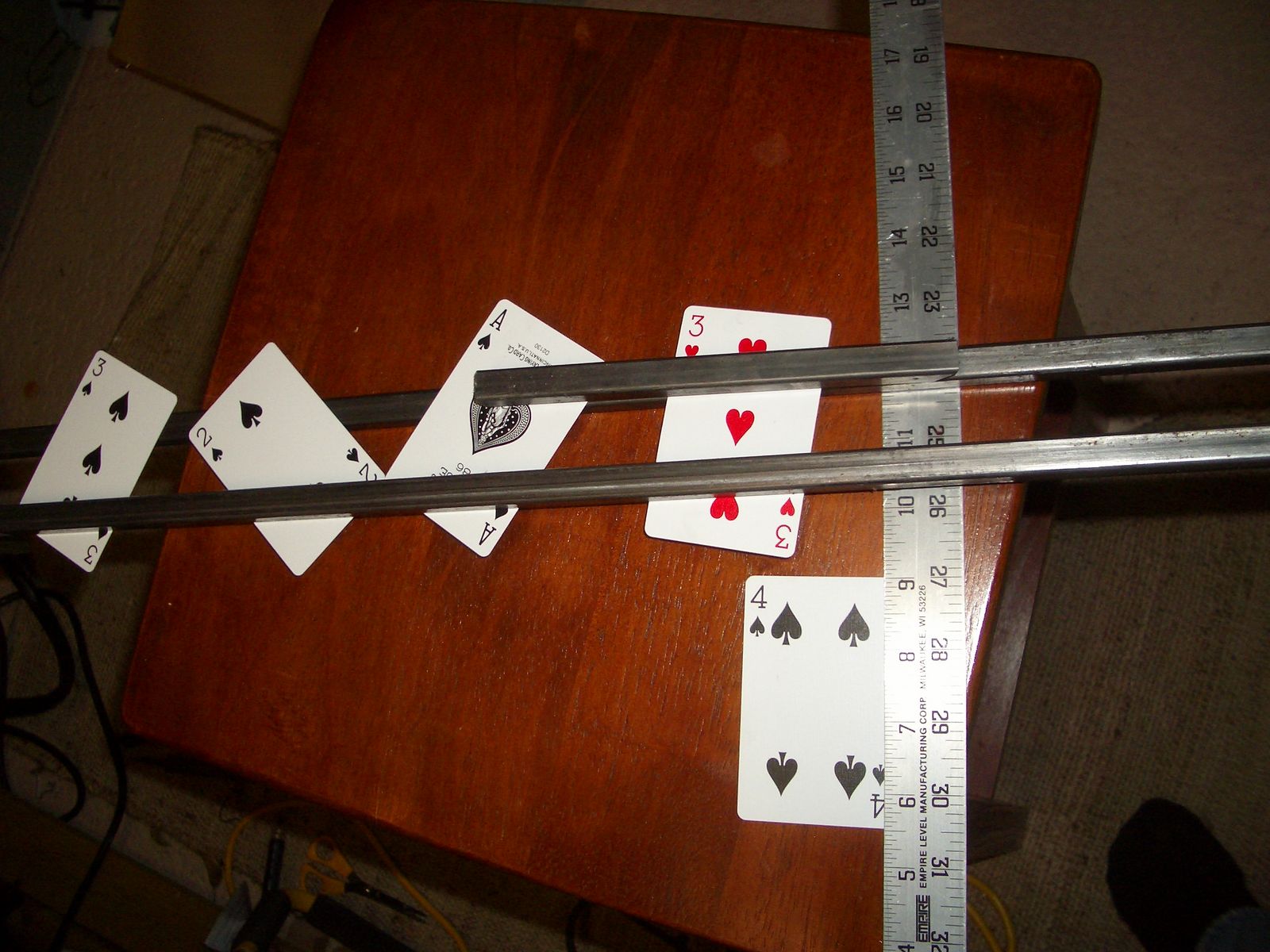 Hoping the standard rollerblade wheels hold up under the 7,200 rpms 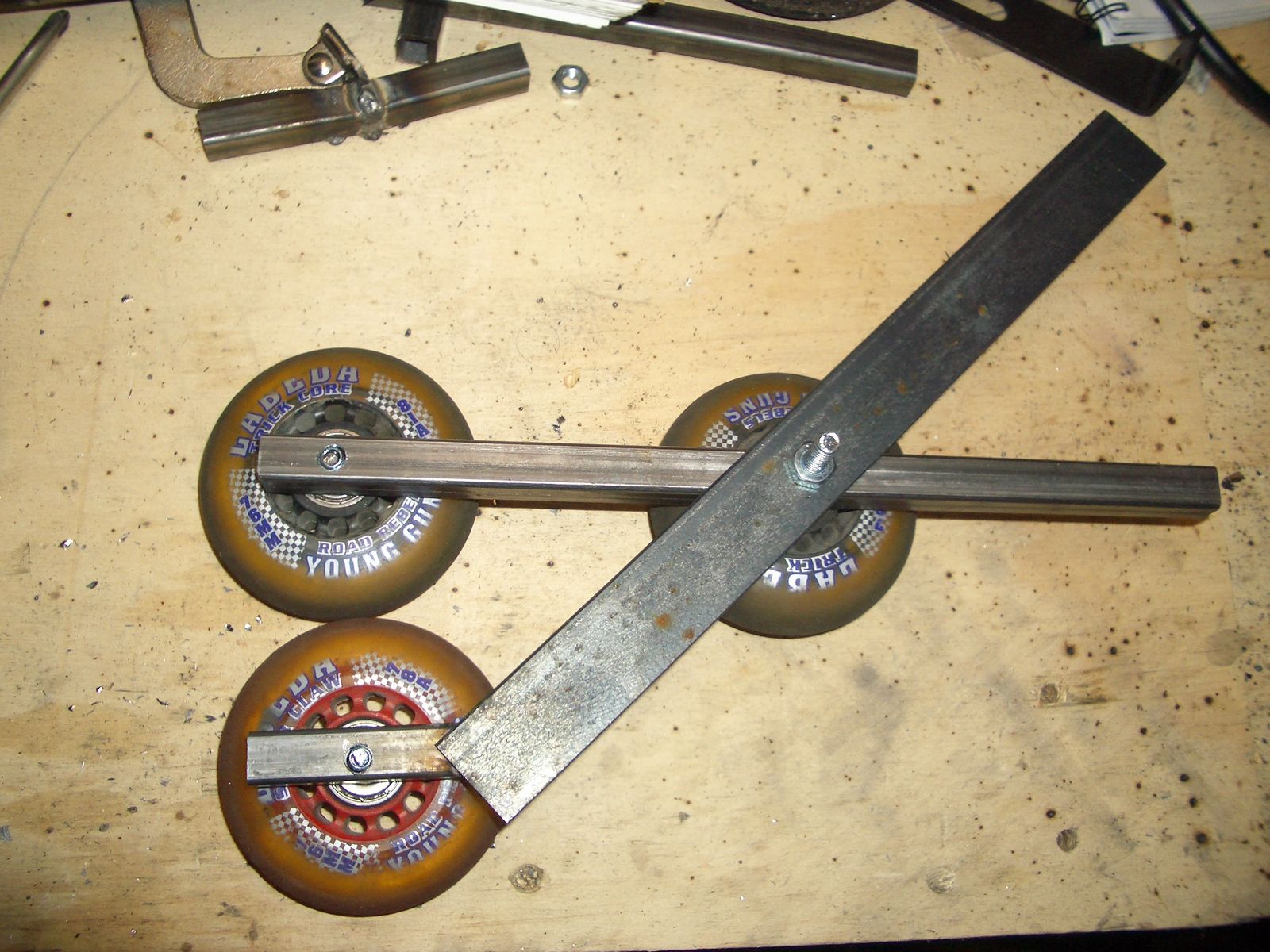 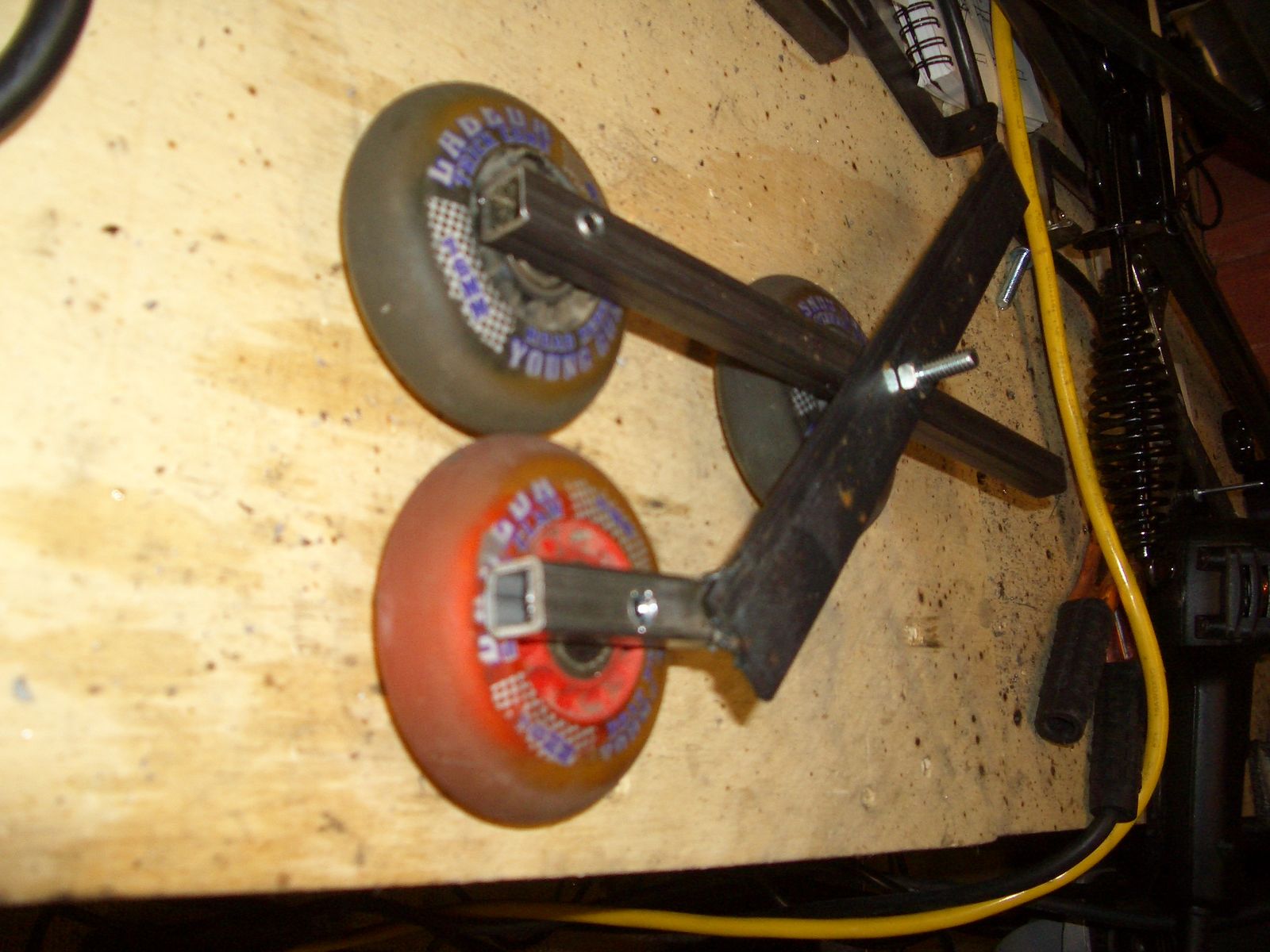 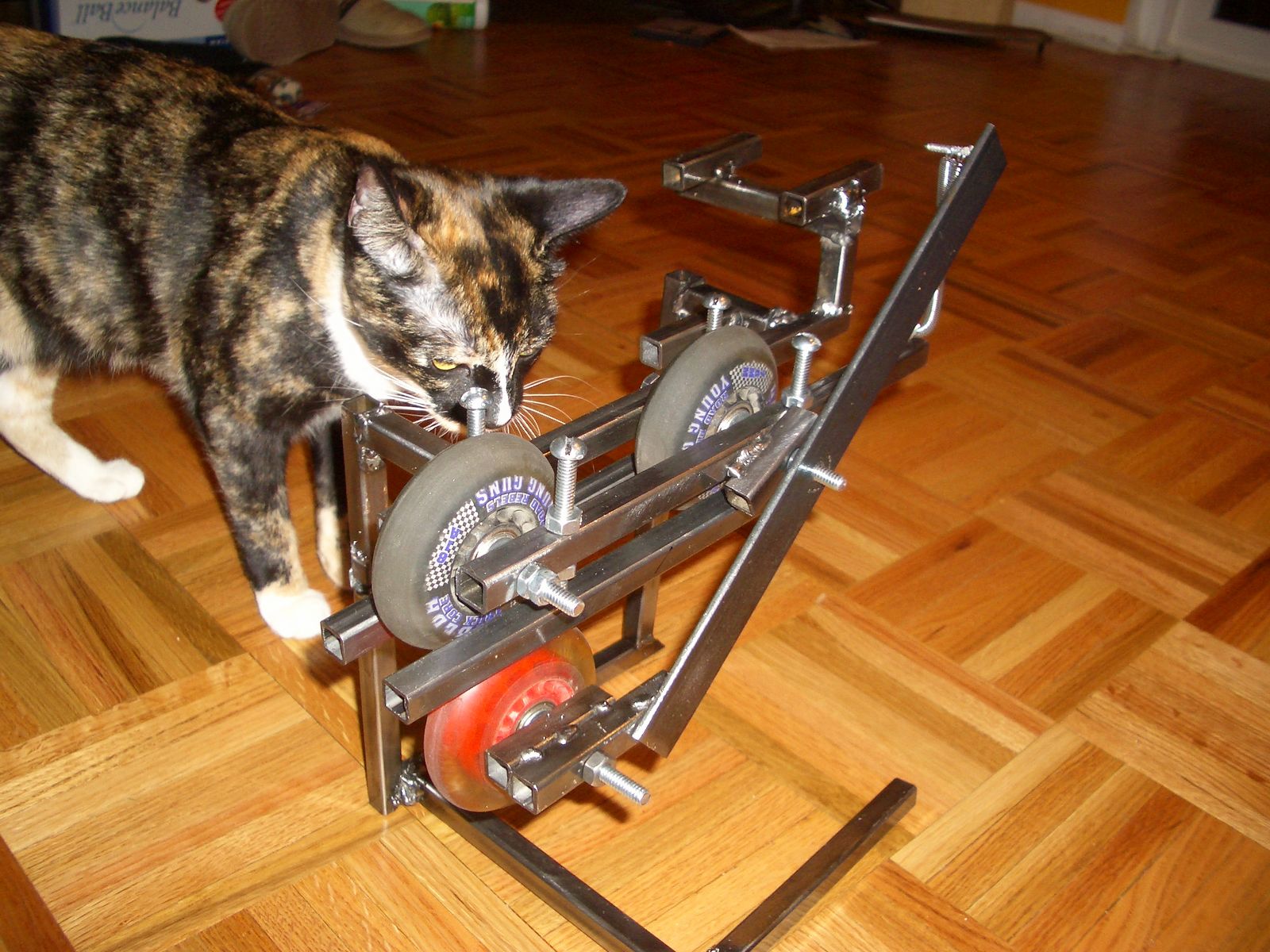 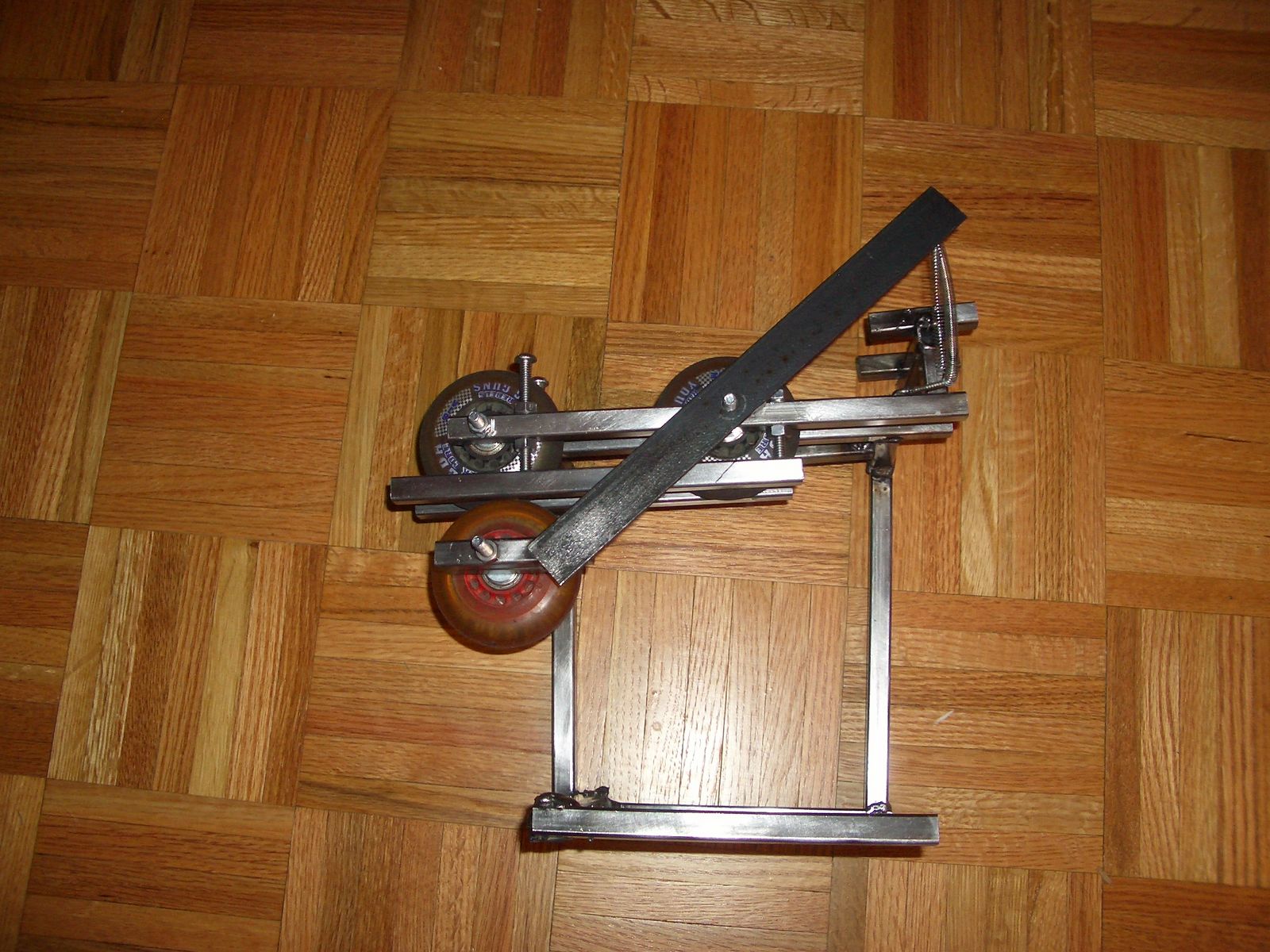 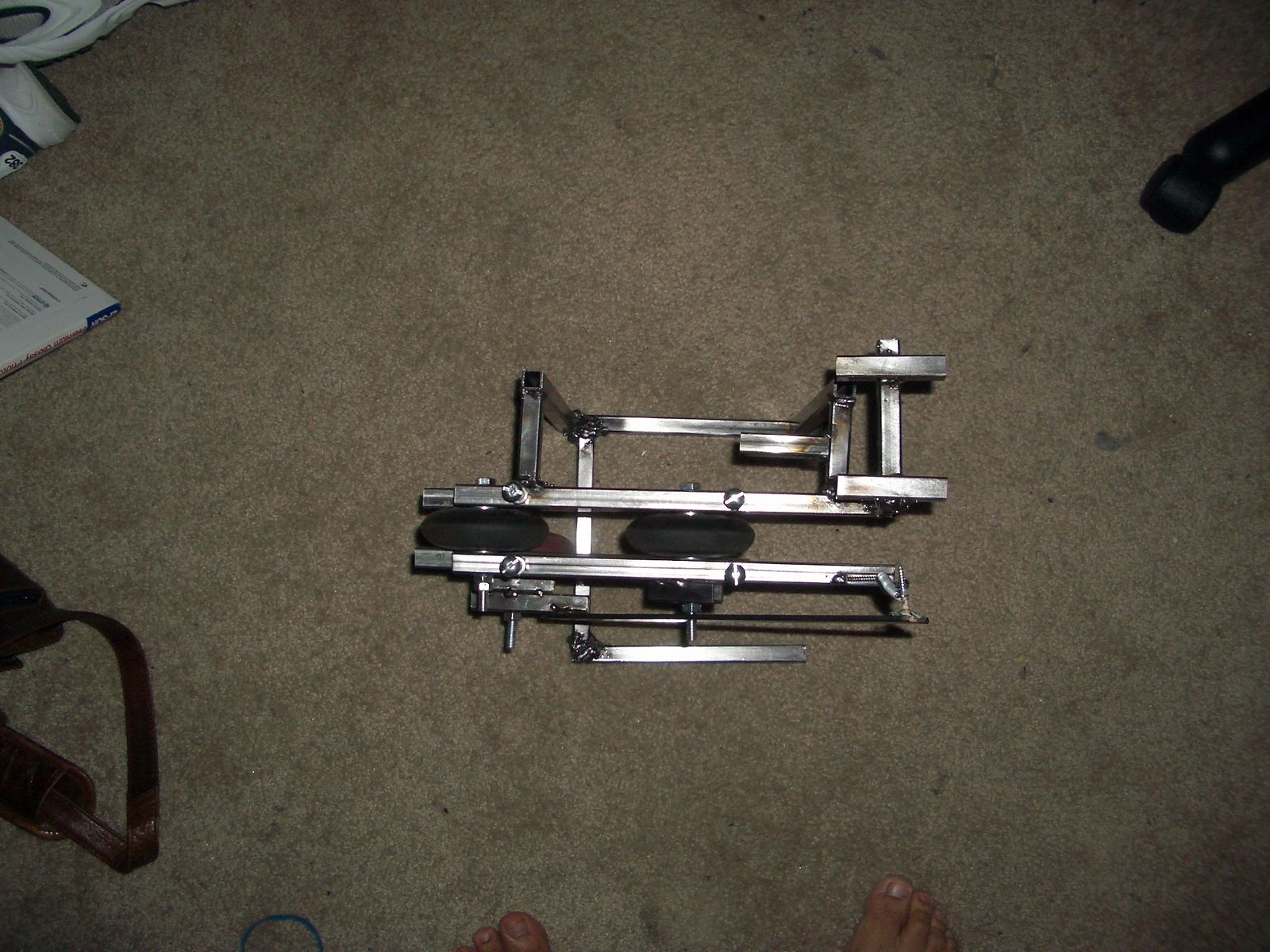 Longshot was carefully handfed. The Variac was set at full 110 this time and the wheels expanded a full 1/4 from the speed. It
was pretty scary standing next to the thing 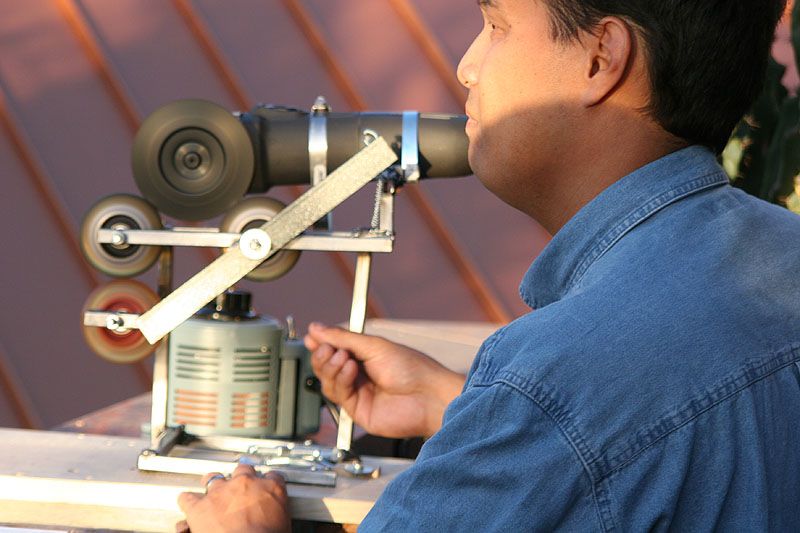